Špilberk Castle has dominated the city of Brno for over seven centuries. In the past the castle provided a protection to the city as its fortress. 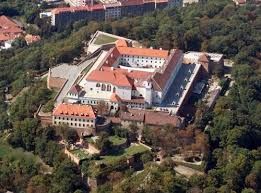 Špilberk Castle was built in 13th century by Czech King Přemysl Otakar II from the dynasty of Premyslides. In 14th century it was used as a residence of Moravian military commanders. Over the course of the centuries, the importance of Špilberk and the role it has played have changed considerably. From a major royal castle and the seat of the Moravian margraves, it gradually turned into a huge baroque fortress, the heaviest prison in the Austro-Hungarian empire (the infamous „dungeon of the nations"), and then a barracks. Casemates (prison) is one of the curiosities of Špilberk Castle and it is one of the most visited tourist attractions in Brno. Today, Špilberk houses the Brno City Museum, and is one of the most significant cultural centers in Brno. It was certified as a national heritage monument in 1962.

St. Paul's and Peter´s Cathedral is the most significant landmark of Brno which acquired its present form during the last Neo-Gothic reconstruction at the turn of the 19th and 20th century. The origins of the church date back probably up to 70's of the 12th century. It was reconstructed several times in the Gothic period. The original little church was changed to a larger one and its importance grew too. In 1296 the church became the seat of the Collegiate Chapter. During the following centuries the church was repaired and rebuilt repeatedly, but we can see traces of its magnificent baroque era in the interior even today. In 1777, Pope Pius VI established a bishopric in Brno and so the church of Peter and Paul was promoted to cathedral. During the last reconstruction the cathedral was decorated by new double spires. When you climb 130 steps to the tower of the cathedral, you'll enjoy a spectacular view of Brno. 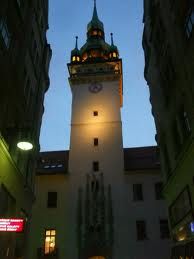 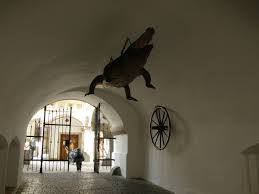 The Old Town Hall is the oldest and most interesting secular building in Brno.

The whole complex served the needs of the city council, which held its meetings there; court proceedings took place there, the city clerk had his office there, money, documents and forfeits were deposited. Of course, a city prison could not be missed out, which was in the rear wing of the town hall premises. In case of threat the defense of the city was organized from here. The historical center and the tower of this building were established around the year 1240.

The archway between Town Hall Street (Radnická) and courtyard form richly decorated portal with legendary crooked turret. It was created in the year 1511 by Anton Pilgram a sculptor and a carver of Central European late Gothic. Courtyard with Renaissance arcades were modified in the late 16th century by Italian architects. Further adjustments are the result of the early Baroque reconstruction. The building served as a town hall from 1373 to 1935. The observation tower which is nearly 63 meters high, gives a view over the whole city. It is open to the public. The Old Town Hall is connected with many legends. The most well-known ones are about the legendary Brno dragon and the Brno wheel. Unique symbols of the city can be found in the passage of the building itself.

The Legend of the Brno Wheel: A man named Jiří Birk lived in a town in South Moravia called Lednice around the year 1636. One evening, while drinking in a pub, he bet with his friends that between a sunrise and a sunset he could cut down a tree, make a carriage wheel and roll it to Brno. That bet was sealed; of course, he now had to carry it out. In the morning Birk, amidst much cursing, set to work, and at noon the wheel was finished. With the very last of his strength he rolled the wheel into the town hall, asked the portreeve to issue the confirmation, and returned home. He won the bet, and the wheel is still hanging in the town hall passage today.

Legend of the Brno Dragon: Once upon a time, a huge dragon appeared in Brno. He ate poultry and strangled lambs, and people were very scared of him. Councilors racked their brains as to how to get rid of him, and in the end announced a reward for the killing of the dragon. One day, a travelling butcher volunteered to try. He sewed up burnt lime into an ox skin, and hid it in the grass. The dragon smelled the ox skin, and ate the whole lot. This made him very thirsty, so he went to the river and drank so much water that it killed him. People took the dragon into the city, had it stuffed, and then hung it in the Old Town Hall passage. .